Make the most of your stories and traditions

Today it is pakjesavond here in the Netherlands. The day when Dutch children receive gifts from Sinterklaas and his servants de Zwarte Pieten.

I find it interesting that a saint who was born year 270  still impacts so many  people. Saint Nicholas was a Greek bishop of Myra, a patron saint for children. Actually, the legend of Sinterklaas is the origin of the more known Santa Claus. This saint has influenced the lives of children ever since.

How can someone who lived so long ago inspire a tradition that - almost 2000 years later -  is still celebrated?

One reason is that legends impact us. Since stories can be powerful influencers, they are sometimes used to manipulate people.

The story of Sinterklaas has evolved and changed throughout the years. Today Sinterklaas comes by steam boat to the Netherlands from Spain and the once scary Zwarte Pieten are spending more time having fun with the children than scaring them. Parents may still use the legend to manipulate their kids, but more often than not the tradition is used for having a great time together as a family. Kids put their shoes in front of the chimney, sing for Sinterklaas, leave a carrot for the horse and the day after they are rewarded with a gift in the shoe. 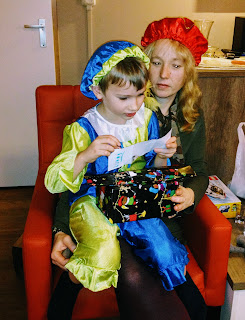 What about your own stories?  Beliefs you have about yourself. That you are stupid / smart, ugly / gorgeous, kind/mean, clumsy / handy....

The story of Sinterklaas has survived for almost 2000 years. Your stories about yourself and people around you may very well last your whole life time. It is up to you to ensure the stories are enjoyable and good for you.  Just like a well-celebrated pakjesavond.
Posted by Annika Rosendahl