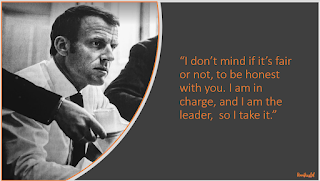 Image: Part of a photo by Christopher Anderson for TIME.

French president Emmanuel Macron about being called “the president of the rich”.

We all fear two things:

Not being loved and not being enough.

When we get criticized these exact fears get activated.

We all want everyone to love what we do and who we are, but that will never happen.

There is only one way to avoid criticism:


Say nothing, Do nothing, Be nothing.

Another, in my opinion better, way is to do as Monsieur Macron.


Just take it and move on.