The Beauty of Art - Part 9: the answers

Just like in The Beauty of Art - part 7, I chose a less known painting by a well-known artist. 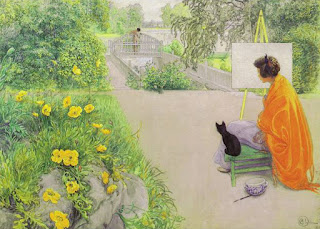 Yes, this is by Carl Larsson, one of Sweden´s most known and most loved artists. Another, more known painting, is Frukost i det gröna (Breakfast outdoors):

One interesting thing about Carl Larsson is that he, like so many artists, painted a lot of paintings before finding the style that he became known for. Here is an example of a painting by Carl Larsson while he was still in art school: Sten Sture d.ä befriar den danska drottningen Kristina ur fångenskap i Vadstena Kloster. 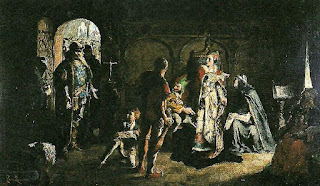 Unlike Vincent van Gogh who only became famous after his death, Carl Larsson became a popular artist during his life time. He grew up in poverty but when he became an adult he had a great family life, so often depicted in his paintings.

The answers to the questions for this Beauty of Art are the following:


Who is the painter?
Carl Larsson
What is the painting called?
Bron (the Bridge)
What type of art is this?
Nationalromantik (National romantic style)
How does this painting make you feel?
I chose it since the little black cat makes me think of our lovely Kleintje who left us too early (see Only life knows its length) and because I like the yellow and orange colors in it. You have stated you like it too, but that you like other Carl Larsson´s paintings even more.

Thanks for your participation!
Posted by Annika Rosendahl