One day she won't mind. Today is not yet that day.

"Growing old is a lot better than the alternative", he said.


She knew that of course, having lost friends who died far too young. She knew her advancing age was a blessing rather than a curse.

She knew her age (even though she often had to remind herself of the exact number by subtracting her birthyear from the current year) and she did not mind being the age she was. Of course it was so much better than the alternative.

"Being old is one thing, looking old is another", she muttered,

and she simply had not gotten used to looking old yet. In fact, she was not even aware of how age had gotten to her face and hands until his casual remark made it blatantly clear.

Wrinkles are just the scars or all your smiles, he added,

slowly realizing how her thoughts had turned his childishly innocent remark into a sharp arrow. He, who had once said it was her smile that had caught his attention so many years ago.

She knew that of course, she knew it so well. She tried to pull the arrow out of her heart by saying to herself that she would rather be wrinkly and smiling than expressionless and blank.

Her rational part also knew she would continue to look with pity at those using botox to stop a natural process in its tracks instead of just aging with dignity. 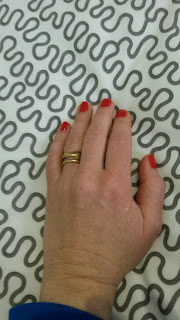 Not yet ready to look in the mirror and notice that the wrinkles around her mouth did not go away even when the smile did.


One day she won't mind.
But today is not yet that day.