#SwedeInMadrid: Exact time of no importance

We looked at the note and wondered why on earth a Spanish doctor would make an appointment at 11:42, when Spaniards in general seem to look at time as something very approximate.

Alex, my English hair dresser, says that Spanish people are the worst clients. They can show up an hour or two late to an appointment. Or they do not show up at all. Or they cancel the whole appointment because it rains. (See "Do they understand it's just water?") 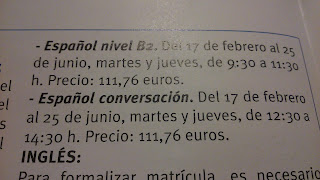 How anyone can care about 1 euro cent is beyond me. In our house we have a jar filled with all the "red coins" as we call them. Coins that are more or less worthless; 1, 2 and 5 euro cents.

Once we have gathered a whole lot of these coins I plan to give all of them to one of the many street artists in Madrid. To give them just one or two of these silly coins would be an insult so I will wait until they amount to a few euros. That will take a while...

This useless exactness makes me think of something I heard in a course many, many years ago. It was a course in project management, and that day we learned about the project planning tool Microsoft project. The teacher told us that unless we had projects that were only one day long, we should not use the feature that allowed us to plan with hours and even minutes.We should not fool ourselves into thinking it is possible to predict a project that will take weeks, months or even years, to an accuracy of hours or minutes.

Just because we can measure something accurately, like cents and minutes, does not mean we can live according to such accuracy.

Regarding the doctor's appointment at 11:42; we were there around 11:30 but we did not get to meet the doctor until some half an hour or so later.

We were not surprised.