Friend or foe? How to make more of the former and fewer of the latter

The old-fashioned language in the well-known sentence "Friend or Foe" shows us that we have divided people around us as either friend or foe for a long time.

We have all heard the phrase:

“I’d rather have an honest enemy than a fake friend”

but that doesn’t change the fact that we want to have many true friends and few foes.
When it comes to dealing with enemies, let’s look at what some influential persons have to say about it. 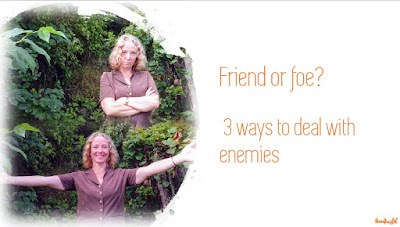 Some frown at this advice, thinking “not making enemies” means you don’t stand up for yourself or what you believe in. As if fighting and arguing shows that you are strong and committed while not doing so means being fearful and indifferent.

What if it just means you stick to what you believe, regardless of what others say or do?

Bob Proctor put it well in one of his books:

Act as if you have:

“Opinions are like ass-holes. Everyone’s got one. That doesn’t mean you have to wave it around.”

If you can avoid making enemies, great.

If you have already made some, then what?

2. Leave your enemies until they make a mistake

Rather than trying to destroy your enemy one way or the other, you can take the stance of  Napoleon Bonaparte and let them mess up themselves.

(Never interrupt an enemy who is about to make a mistake.)

My favourite way though, and the quote that inspired me to write this post, comes from Abraham Lincoln. During the Civil War he was criticized by some for showing respect for Southerners instead of seeing them as enemies that should be destroyed.

“Do I not destroy my enemies when I make them my friends?”

Of course he did.

I hope you will refrain from making enemies, and if you have already made a few, I hope you destroy them by making them your friends.