The journalist put her microphone just a few millimeters from the seasoned minister’s mouth. He hoped the sweat he felt on his forehead didn’t make him glisten on TV. The question was about the homeless. What he planned to do about the growing number of people who had nowhere to live, not enough to eat.  He put on his serious face, nodded slowly and said that it was unfortunate that the economy had put many people on the street. Then he mentioned how much money the government had already invested in different initiatives, and he said that unfortunately there were no more resources available. The taxpayers were already under too much pressure.

Lack of money.  Lack of time. Lack of resources in general. There are many reasons - or shall we be direct and call them excuses? - for not being compassionate. For not even trying to find a way.

Massimo Bottura didn’t hide behind any excuses when he decided to serve creative meals for those in need. He didn’t let “lack of resources” stop him.
He uses food that would otherwise go to waste.
He agreed with the church La Madeleine in Paris that he could borrow their basement.
And so many were inspired by his initiative that he has thousands of people volunteering to be part of the staff that serves food to homeless people and refugees. 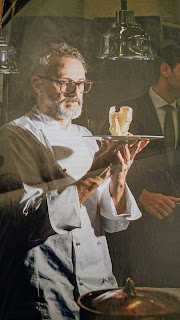 Whenever you are about to say “I don’t have time / I don’t have the money / we don’t have enough resources”; stop yourself.
Think again.If you really want it, if it is important enough, you will find a way.