The Beaty of Art part 11 - The answers

Did you know the answers to tbe Beauty of Art part 11? 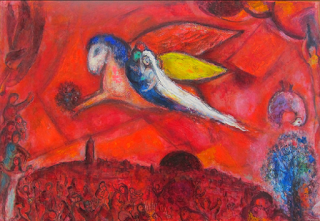 The artist is Marc Chagall, or as he was named when he was born in what was then Russia, today Belarus: Moishe Shagal.

The painting makes you think about:

I also feel the warmth thanks to the beautiful, strong colours and when watching the painting I feel like I am in the middle of a storybook.


Like so many other painters of his time, Marc Chagall went to Paris to develop his art. He returned to Russia to marry Bella, the love of his life. He described their first meeting as follows:

"Her silence is mine, her eyes mine. It is as if she knows everything about my childhood, my present, my future, as if she can see right through me."

His plan was to return to France shortly after the wedding, but the first world war stopped them from leaving Russia.

A few years later they went to France again, where they lived happily while Marc continued with his art work. He was so involved in it that he did not realize the dangers that the second world war brought for jews like himself. In the nip of time he and his wife were able to flee to the US.

When Europe was free again, Marc returned to France.

Marc Chagall survived two world wars and lived to be 97 years old. During his long life he created art in many different ways and styles.  Picasso supposedly said:


"When Matisse dies Chagall will be the only painter left who understands what colour really is".

To learn more about Chagall and to see more of his beautiful paintings, take a look at this Artsy page.

Those of you who enjoyed the movie Notting Hill, may remember that this Chagall painting, La Mariée,plays a role in that movie, as you can see in this 2 min long youtube clip. 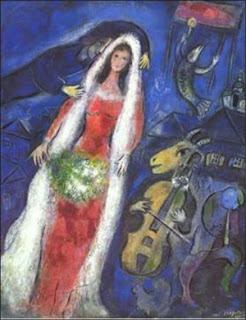 Thanks for participating!
Posted by Annika Rosendahl