The painting in the Beauty of Art part 10: 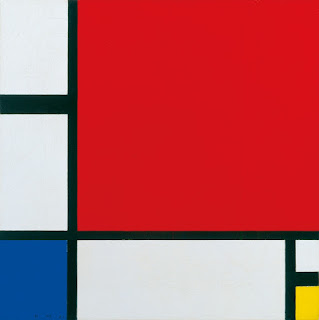 is indeed Composition with Red, Blue and Yellow painted 1930 by the Dutch artist Piet Mondrian. The painting is oil on canvas and can be found in Kunsthaus Zürich, Germany.

I did not know Piet Mondrian was Dutch until I lived in the Netherlands and learned more about Mondrian when I passed by a museum with some of his paintings.

It was not that strange that I did not know, since Mondrian changed his name from the more Dutch sounding Mondriaan (double a) to Mondrian to "emphasize his departure from the Netherlands, and his integration within the Parisian avant-garde" in 1911.

Just like we saw in the Beauty of Art part 9, the artist had created other paintings in completely different styles before finding the style he became known for. This is one of Mondrian's earlier works: 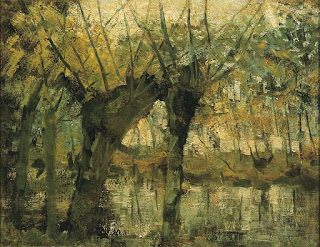 He wanted to create paintings that would express what he called Neo-Plasticism and he was one of the founders of the Dutch modern movement De Stijl.

His most known paintings consisted of white ground upon which he painted a grid of vertical and horizontal black lines and the three primary colors - like in the Composition with Red, Blue and Yellow.

Unlike Carl Larsson, who found the love of his life and stayed together with her until death parted them, Piet Mondrian had a short marriage - only three years long - with Greet Heybroek and after that he never re-married.

He died in peumonia, leaving unfinished paintings behind. I can imagine that is a good time to go for an artist, right in the middle of creating.

As always with art, there are different opinions. Some of you love the art of Piet Mondrian. Lisbeth for instance describes how his art talks to her and makes her want to sing, while the fish art is more like her mother's knitting: beautiful but nothing that appeals to her.

Others expressed that they can somehow understand the beauty of  his art, but that it is not anything they would like to have on their wall at home. Some would like to have his art in their home, if not as a painting than on something else, like a chair. 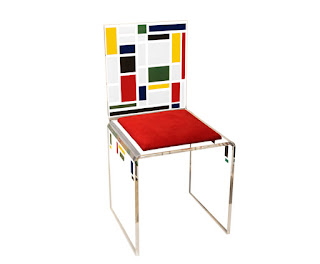 Heike, who is an artist herself, says that she feels a lot of admiration for Mondrian. She understands  how much courage it takes to choose your own way, stick to it and create something that deviates so much from what has been created before.

Personally I can see the beauty of his art, a great expression of  "less is more". For me, the simplicity I perceive can get in the way of my admiration. So to me it is pretty and clean, but it does not leave me impressed.

The work of the fish on the other hand impresses me. I love when I get reminded about the greatness and complexity of our fellow creatures.

Thanks for your participation!