No, good intentions are not enough

Lara walks into the living room. Miko, her five year old son, is sitting on the floor. Scattered around him are snippets of something vaguely familiar. When he turns around, big smile on his face and scissors in his hand, she understands where the snippets come from.
“But sweetheart, why have you cut my driver’s license into pieces?”
Miko’s smile fades a little as he hears the tone in mummy’s voice.
“I needed a picture of you”, he stretches out his hand.
“For your mother’s day card.”
In his hand is a carefully cut out picture of her face.

When it comes to kids, all that matters is the good intention. Lara will of course hug her son tightly before she starts the process of getting a new driver’s license.

However, from grown-ups, from ourselves, we can expect more.

Good intentions should not be used as an excuse for not doing well.

You may disagree with this opinion. There are many who think that good intentions and hard work should be enough.

Like those who work at a company with the best of intentions, but without creating results, who still expect  a yearly raise and a promotion.

Or coaches in sports that yell at the kids on their team, making them hate the sport they once loved, or even worse, making them dislike themselves. Some of these trainers say that they do it for the kids’ sake; they believe it is good for all kids to be pushed.  Such trainers may have good intentions but if they do not bother to learn how to help all the different persons in their team, I do not think it is good enough.  (The above example is also applicable for many bosses.)

Another example is a story I heard recently, about an animal shelter opening in the outskirts of Madrid.  A group of young people wanted to take care of some of the many abandoned animals.  They had lots of good intentions, but not the will to achieve the necessary knowledge, and several animals died under their care – or rather their lack of appropriate care.


It may sound hard, but to me, it is important to not just mean well, but to do well. And that will require more than just a good intention.

Let me conclude with a statement I use when I talk to school classes about writing and possibly choosing that as a career:

“Follow your heart, but take your brain with you.” 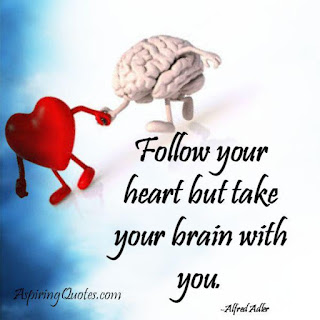