"To vote, you should pass an intelligence test first!"

This was the opinion of one of my classmates when I studied at Chalmers university of technology. Or, as he put it:

However, since democracy by definition is:

it will not be a democracy if only part of the people, those who pass an intelligence test, is allowed to vote.

So I disagreed with the comment at the time, but there was something in there that resonated with me and I have remembered it ever since.

Recently I read a quote from Roosevelt that made it all more clear to me:


"Democracy cannot succeed unless those who express their choice are prepared to choose wisely. The real safeguard of democracy, therefore, is education." 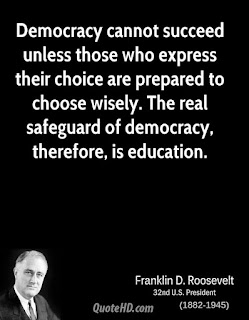 That was it! It is not an intelligence test that is needed, it is ensuring everyone is "prepared to choose wisely"!

How do we make sure everyone is prepared to choose wisely?
Free access to education is one step of the way. It is not enough though.

Because as I wrote in this blog post: Ignorance is not the problem; pre-conceived ideas is. To not know, but behave as if we do, by spreading and believing in simplistic and incorrect views of the world is a recipe for disaster.

So if education is the first step, the second is to accept that no matter how much we know, there is always more that we do not know so we need to keep an open mind at all times.


"Nothing in the world is more dangerous than sincere ignorance and consciencious stupidity."

I hope you are all willing to apply the knowledge you have, keep your mind open and choose wisely.
Posted by Annika Rosendahl