This is part 4 of a story that starts here.

"Look there is another one!"
Maria nudged the girl next to her with an elbow and pointed eagerly.
They were walking along a stone pavement with large trees. Trees that were in the way when walking, but that were an absolute necessity in the hot summers of Madrid, providing patches of much needed shade.
Her friend moved the long, blond hair away from her face in order to see better.
"Another what?"
"Another owl. You know, they are all over Madrid. I have seen them on lots of trash cans. It´s pretty, don´t you think?"
As they came closer, the owl became more clear.
"And then there is this message", Maria continued, "that is either a threat or terribly romantic."
They stopped in front of the metal trash can. The blond girl looked carefully at it. Unlike her friend she had not seen any of these before. She was sure she had not. And still there was something vaguely familiar with it... 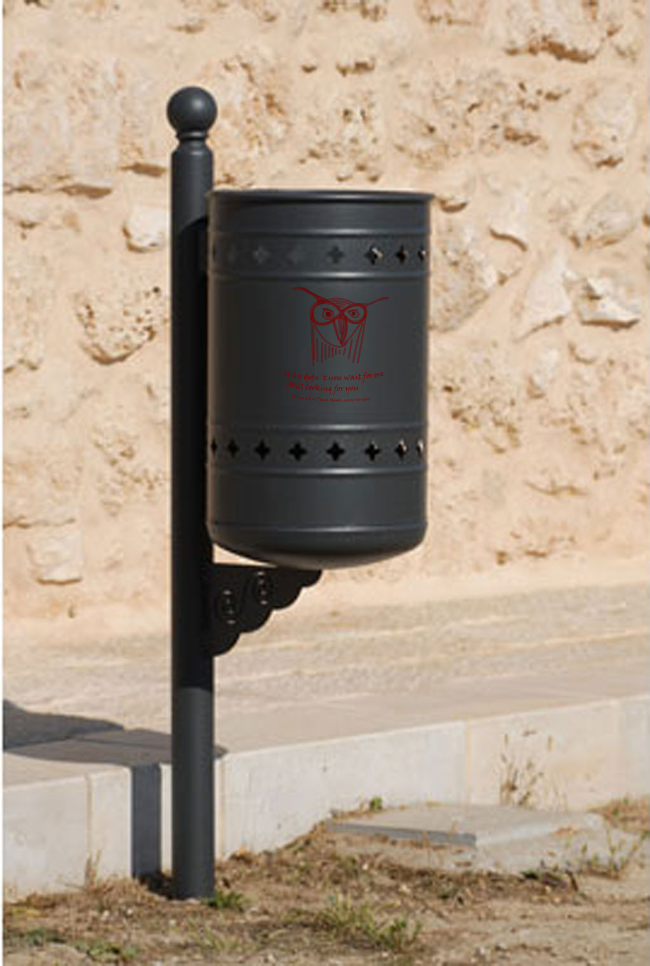 "Did you say there is a message?"
"Yes, here, look!" Maria pointed below the owl and her friend sat down on her heels to see better.


"Why didn´t you wait for me? Still looking for you."

She raised her eyes so they met the ones of the owl.

He was sitting in his bed, reading, when he suddenly saw her eyes in the middle of the pages, blurring out the letters. The light blue eyes, looking here and there as if she was looking for something. He could see her, but she could not see him. His heart was racing while the rest of him was dead still, not daring to move, not wanting her to go away again.

When she finally did go away, when her eyes disappeared and the book looked just like it had done before, he stood up and walked straight to the painting he was working on. It was finally time to conclude it.

"Look, look here.  It must be some kind of artist who is doing this as a way to get attention."
The girl with the blond hair looked where Maria had her finger. When she read it her heart did a double jump.


You can read the last part of this story here.