Angela Merkel - I wish you were Swedish

Many Swedes are proud of persons like Raoul Wallenberg, Dag Hammarskjöld and the contemporary Jan Eliasson.

Today, when men, women and children seek refuge with such desperation that they perish on the way, the Swedish politicians...

When children are drowning the time for talking is long over.

If a house is on fire there is no time to discuss who should put it out or how to make sure everyone contributes in a fair way. First you put out the fire.
Who should put it out ?
Anyone who is able to.
What if not everyone helps out?
Then those who put out the fire do so without the help from the others. After the fire is out, there will be time to talk to the ones who did not help out and agree on how to improve in the future.

Angela Merkel seems to know this. In addition to talking to other politicians, she takes action.

She has decided to ignore the Dublin regulation for now, letting refugees from Syria stay in Germany even if they originally entered via another EU country. (When Swedish politicians were asked if Sweden would do the same the answer was that they wanted to discuss it more within EU first.Talk, talk, talk...)

She has sent in armed forces to put up tents in public parks, to provide shelter for refugees. 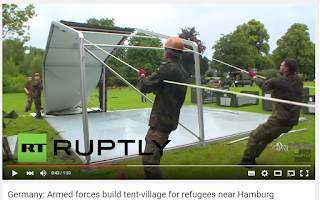 She is showing the way for her fellow politicians when she says:


"If we rescued the banks, we can save refugees"

The title of this blogpost says that I wish Angela Merkel were Swedish. Let me re-phrase that:


Angela, I wish the Swedish politicians would act the way you do.

Dont' get me wrong. This is not a complaint. Sweden is doing well; giving shelter to many refugees and being part of discussions to improve the situation. But the leadership is without a doubt coming from Germany's Angela Merkel.


PS. There are people who spread a video on social media where Angela Merkel is telling a Palestinian girl that not all refugees can stay in Germany. Often the ones who share the video do it to discredit Angela.

I wonder if the same persons think that we should not honor Nelson Mandela for all the great work he did, since he also participated in violent actions before he was put in prison?
And should we ignore the great I have a dream speech because  Doctor Martin Luther King Jr was not only a great civil rights fighter but also a man who cheated on his wife?

Let´s not be childish. People who do great things today should be recognized for that, even if they have also done things that were not great.
Luckily Angela is recognized by many for what she does, for instance by a number of Syrian refugees. According to an article in the Swedish newspaper Göteborgs posten she is now referred to as The mother of the outcasts: 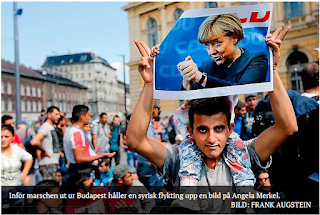 Maybe one day Angela, you will be the reciever of the Raoul Wallenberg award - or maybe there will even be an award named after you.
Posted by Annika Rosendahl