Thank you, mum, for welcoming another son

Below you can find another chapter from the book Thank you, mum.  I hope it touches your heart.

(For the Swedish version, scroll down and then select Next post.) 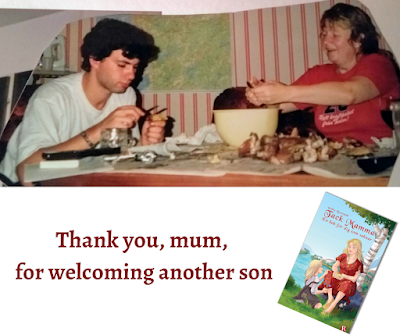 I had just picked up my boyfriend, Michiel at the station. Our love was boundless. It stretched beyond borders, and even though he lived in the Netherlands and I in Sweden (later on in life, the roles would be reversed, but that's a different story), we did everything we could, on our meager student budgets, to get to see each other as often as possible.

Michiel had traveled by train for many hours. He arrived the same day you threw a Christmas party for your class. It was a tradition for everyone in the family to help out at these parties. Neither you nor Dad made any distinction between work and spare time. You loved being a teacher, Dad loved working with cars. You saw no reason to limit these activities to just a few hours a week or to separate work and family either. Everything was connected. So, when my boyfriend arrived on the same day as the Christmas party, I obviously was expected to bring him along.

It wasn't so obvious to Michiel. He was tired after the long trip and just wanted to see me. To meet my family was a part of the package, he thought that maybe a simple "hi" would suffice, then we could be by ourselves. He didn't know how our family worked, Mum. First of all, it never occurred to me that he'd be tired. Tired was an unfamiliar word to me.

I thought the same went for the whole family. Later on in life, I realized that you did in fact get tired, Mum, but you ignored it. Wore yourself out. Maybe because you tried to keep up with Dad's endless energy, which my brother and I inherited too. We keep going, full force, not noticing until much later that not everyone is up to speed.

Sometimes, we joke about it, although there is some truth to it, that we've pushed our significant others too hard.

You got burnt out trying to keep up with my dad. My brother's first wife got burnt out as well, my husband too. We'd stand there, all three of us wondering what happened.

So, the possibility of Michiel being tired never struck me. We were in love, but we didn't know each other well enough yet for him to say that he'd rather not go to the party. I probably would have ignored that, saying we'd only stop by for a few minutes.

When we arrived, the party was in full swing. On the topic of energy; a whole class - or maybe it was an entire primary school - gives off a whole lot of energy. The kids were all over the place, full of happiness, cheer, and laughter. After a while, you pulled me aside and whispered,

At first, I didn't like that comment. I didn't want no "mother-in-law's dream" of a boyfriend. I wanted something more exciting. And Michiel was, to me. For you, Mum, he was a dream.

You two grew so close that when you passed away, Michiel was overwhelmed by the emptiness you left. Suddenly, he felt left out. He'd always been a part of the family, but it was mostly my Dad, my brother, and I who organized hospital visits and planned the funeral.

At first, we didn’t understand why he felt left out. It was custom for the closest family to handle those kinds of things.

"It was probably because you two had the strongest bond," I said, and we both knew it was true.

Michiel had become like another son to you, Mum. You welcomed him with open arms, and you let him into your heart (Dad needed some convincing). A heart so generous, it overwhelmed Michiel. Suddenly, he had someone whom he could really talk to; someone with whom he could be vulnerable, without feeling weak or silly.

Michiel's family is not all that emotional. His mother is, just like me, an ice queen. Maybe that's why we get along so well, she and I. We're both women, who despite our relatively tiny size, invoke respect without having to raise our voices.

When the gloomy, dark weather of fall came, you and Michiel would both feel blue. The rest of the family never really understood how you felt. Just turn on a light, what's the problem?

Your and Michiel's feeling were like rollercoasters, mine and Dad's were more like bumper cars. Not really up and down, more all over the place. Michiel and I had a yearly "goal check-in" where we'd share our results and aspirations. That's when you truly felt connected to him, Mum.

"Sure, it's fun looking back to see your accomplishments, Annika. Although I agree with Michiel. Sometimes, we set up goals, but it doesn't always end up the way we thought."

Dad and I set up goals and we see them through. You and Michiel follow your heart, wherever it may lead you.

You were a teacher, not only in a professional sense, but as a person. You couldn't not teach; it was such a huge part of you. You taught Michiel Swedish, about Sweden and other things you figured he ought to know.

One summer, when Michiel came to visit, you saw how busy I was. I was too occupied to be with him. You made sure that you, Dad, and Michiel went off on a fun adventure for the day. I saw what I needed to pursue a goal, you saw what Michiel needed and gave him that.

During our last few months together, you two were close. You sat on the pier together, the one by your house. You asked him if it was an expensive place. I explained that you probably thought we were at a café getting ice cream. I went back up to the house to fetch some ice cream from the freezer. Dad had filled it with lactose-free ice cream for you. I heard you say:

"She seems nice, don't you think?"

You had a great time at that café on the pier, my husband and you.

Thank you, Mum, for welcoming Michiel into your heart. You'll always live in his.

Please share this blogpost if you think it can help someone!

This was a chapter from the book Thank you, mum. A book for those who miss someone.

To read the first chapter, go to this post. To get a notification by mail when a new chapter is posted, click here.

If you would like to give the book to someone you think can be soothed by it, or to yourself, you can find it on Amazon on any of the links below, or you can search for it on your Amazon of choice.

Amazon in the Netherlands (if the price of the paperback is higher than about 17 euros, check out another market)

Amazon in the UK

Amazon in the US 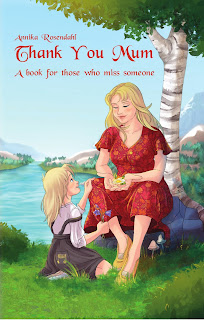