Is anger good or bad?

“I have never seen you angry. You are always unfazed. It makes me wonder what you are like when you do get angry.”

You don’t want to know what I am like when I am angry, I thought, when a colleague of mine made this remark years ago. 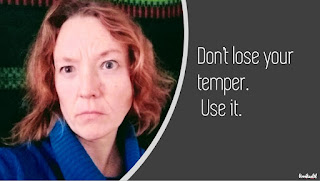 The most frequent feedback I ever received over the years as a leader has been that I am calm. Regardless of circumstances, regardless of how stressful a situation may seem, I remain calm.

That doesn’t mean I never get angry. I do.

My kids definitely agree to this, as well as the guy who didn’t keep his hands to himself at that party at University decades ago. I shoved my elbow in his chest before I turned around and yelled at him. With fear in his eyes he stepped backwards, repeating over and over again it wasn’t him. It wasn’t until my friend tapped me on the shoulder and let me know it indeed hadn’t been the guy I was yelling at, but his friend (who, cowardly enough, had run away before I turned around) that I stopped yelling at the semi-innocent guy. Semi, because, you know, just standing by and doing nothing when your friend behaves like that isn’t exactly something to be proud of either.

Should, or shouldn’t we use anger to influence a situation, to initiate change?

According to Freedomways magazine, Martin Luther King said in 1968:

"The supreme task [of a leader] is to organize and unite people so that their anger becomes a transforming force.“

I admire Martin Luther King greatly. Who doesn’t? But I think we can agree that it is better to transform and influence people and situations without anger than with.

If you do get angry, make sure you don’t suppress it. According to Chris Aiken MD at Wake Forest University School of Medicine, repressed anger is associated with heart disease.

Don’t repress your anger. Don’t let your anger get the better of you. But do allow yourself to use it.