The Beauty of Art: Part 7 - The answers

Yes, the painting displayed in the Beauty of Art part 7 is indeed:
"De aardappeleters" (the potato eaters) by the Dutch artist Vincent Van Gogh. 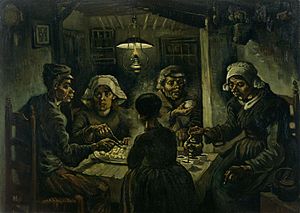 He painted it in 1885, saying he wanted to depict peasants as they really were. He deliberately chose coarse models that would look natural in his painting.

If you want to see the painting in real life, go to the Van Gogh museum in Amsterdam, the Netherlands. It has once been stolen from there, but was returned shortly after for unknown reasons.

When I first saw it in Amsterdam, many, many years ago, I was surprised. The paintings I had seen by van Gogh before, were very different, like his painting of sunflowers: 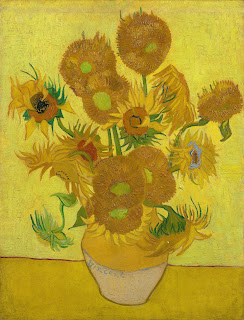 or "Starry night" (one of my favourites!): 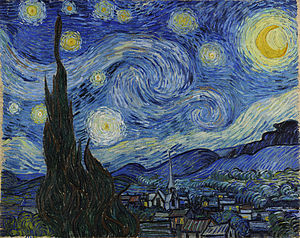 So, how does the painting of the potato eaters make you feel?

Heike said that she had never really liked the Potato Eaters that much. Not until she learned more about Vincent van Gogh at a lecture. When she did, the painting suddenly came alive.

The painting makes Michiel think about the differences in the world at that time - despair and hardship for the peasants, the potato eaters in the Netherlands, at the same time as a lot of things were happening in the wild west, with the gold rush just ending.

Staffan gave a great tip for those who want to learn more about the story behind the painting: Irving Stone's book "Lust for life".

Vincent van Gogh did indeed have a very special life and it is interesting to read about this artist who is considered a post-impressionist, just like Paul Cézanne, in Beauty of Art part 3.

Vincent was very productive, painting some 900 paintings in 9 years. He struggled with his health and with money, but he kept on painting, as if he couldn't stop himself.

Some claim that to find the purpose of your life, all you have to do is think about what you always do. No matter how tough your life is, there is something you always do. When you remember what that is, you have found your purpose. For Vincent van Gogh this was clearly painting. Even though he received neither fame nor wealth during his lifetime, we are many who are happy that he did follow his heart's voice and created paintings that have impacted so many.

His life is also a reminder of the importance of always having someone by your side, someone who believes in you when no one else does. For Vincent this was his brother Theo, who after the death of his brother wrote:

"People should realize that he was a great artist, something which often coincides with being a great human being. In the course of time this will surely be acknowledged, and many will regret his early death.”

I hope Vincent has a lot of fun up there in the Starry sky. I bet he is painting there too.
Posted by Annika Rosendahl