The Beauty of Art Part 6 - the answers

It was our first summer in Spain. We escaped the heat in Madrid and went north to the Basque country. Bilbao is a major city there, a city that is complementing its industrial legacy with being a city of art.

We saw the sculpture I put in this quiz outside of the Guggenheim Museum. I am not particularly fond of spiders, but this one I found impressive. 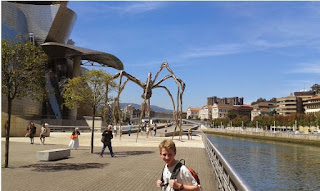 Several of you knew the answers to this art quiz!

The sculpture is called Maman
The artist is Louise Bourgeois
The sculpture on the picture is outside of the Guggenheim Museum in Bilbao, but, as you pointed out, there are other versions of this sculpture in other places in the world as well.

The first one was made in stainless steel and put outside Tate Modern in London. 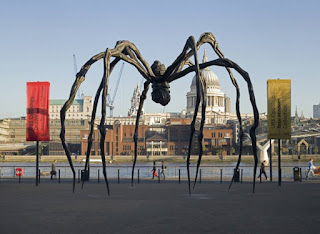 In addition to the ones in London and Bilbao, there are sculptures of Maman at:

Sometimes these  sculptures are moved to other places for temporary exhibitions. It has been in Stockholm for instance.

The artist says she has dedicated the spider to her own mother:

"The Spider is an ode to my mother. She was my best friend. Like a spider, my mother was a weaver. My family was in the business of tapestry restoration, and my mother was in charge of the workshop. Like spiders, my mother was very clever."

You have also commented on the symbolism of the spider and motherhood, and many of you like that something normally so small is depicted so huge which is impressive and also a bit scary.

I like the mixture of the large size, the heavy metal and the light appearance of the spider, barely touching the ground with its the pointy feet. An impressive piece of art indeed. I am happy I had the chance to experience it that sunny day in Bilbao. 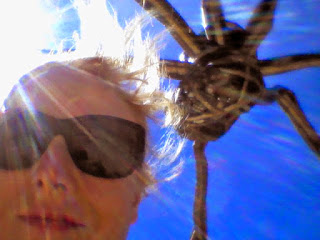