Stand by Paris - Feel No Fear

Paris.
The city I fell in love with during all the weekends I spent there as an au-pair.
The city in which I discovered art. Not only in the museums, but in every park bench and light pole since aestethics is at least as important as function in this fantastic capital.

And now. A blood.stained city that has witnessed tragedies that make my heart bleed.

A lot of people wonder what the world is coming to and they say:


"Just wait, it will come here too"

The ultimate goal for terrorist organizations is not to kill many persons in a sports arena, a concert hall or a train station. Killing people and ruining historic buildings are just means towards their ultimate goal: Creating fear.  Making others so scared that they will give upp their life style, give independence to a part of a country, acknowlegde a certain religion - you name it.

Since the goal for terrorists is to make us scared - let's refuse. We cannot always stop the terrible crimes some persons commit, but we can stop them from achieving their goal. We can refuse to be afraid.
Or as the Parisians put it: "Meme pas peur" - Not even afraid. 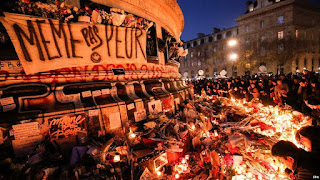 "But how can I not be afraid when such horrible things happen?" you may think.


Well, understanding the nature of terror organizations may help. All terrorist organizations follow an arc of decline and they ulitmately die out, on average within 5-9 years. Look at all terrorist groups there have been in the world: Red Brigades. Baader-Meinhof gang. IRA and the Ulster Freedom Fighters. They created havoc, but still. No borders changed, the western values have not changed. And the organizations have died out.

As Steven Pinker writes in his interesting book: The better angels of our nature


"All terrorist groups carry the seed of their own destruction"

Below is a graph from the book. Contrary to popular beliefs, fewer people are killed in terrorist attacks today, than before. 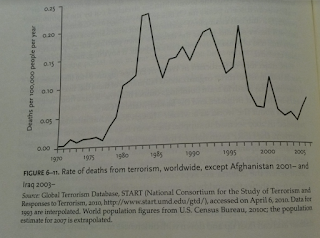 We can see spikes from the 9/11 attack in NY 2001 and the M11 train station bombing in Madrid 2004. Future versions of this graph will unfortunately have some more spikes. France Nov 13 2015 will be one of them. However, as you can see, these are spikes - not trends. The trend is declining.

There is less reason to fear terrorism now than there was a few decades back.


There are many who refer to terrorism like a hydra that grows out two new heads as soon as one is
chopped off. So even if each terrorist group will fail and die out, there is a fear that there will always be new ones coming. 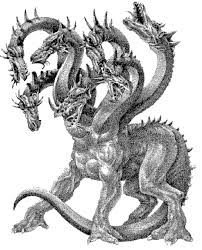 To deal with this, we need to stop feeding the hydra.


Even though it is hard to believe, those who committed the atrocities in Paris were once amazing babies who were hopefully dearly loved by parents and siblings. Still, somewhere along the way they got so lost, so insecure and frustrated that others could convince them that killing fellow human beings is the right thing to do. They let an ideology override their thinking, empathy and understanding.

The hydra feeds on hate and fear.

If we show understanding and respect to one another instead of fear and hate we can starve the hydra and let it die, taking all heads with it.

So where is the world going to?


Wherever we take it.