Fine fines? How can there be something fine about fines?

Well, fines are never really fine, but some are less bad, or "finer" than others.

Like paying a fortune to park the car outside of Liseberg; a great attraction park in Göteborg Sweden, estimating the time when we will be back and noticing when standing in queue to the last attraction for the day that we will miss the end of the paid time with a few minutes - and then ending up with a heavy fine. There is nothing fine about that. It makes me wonder why I paid for the parking at all, I could have just paid for one hour and not four when I ended up with a huge fine anyway for not paying for four hours and ten minutes.

When we parked in the Spanish town Santiago de Compostela the same thing happened.  We came back to the car some time after the time we had paid for had expired. Now to the fine part. By going back to the automat where we had paid for the parking and paying a little extra (in our case 6 euros) we could avoid the fine of 60 euros. That sure felt a lot finer than the fine I had to pay for standing a few minutes too long outside of Liseberg! 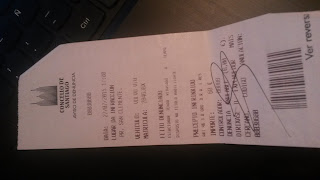 Another example are speeding fines. I have had my share of these in all three countries I have lived in; the Netherlands, Sweden and Spain.

My approach used to be to ignore the fine and hope that they would forget all about it and I would not have to pay. That worked in the Netherlands. In Sweden, with personnummer (similar to social security number / NIE numbers) and efficient authorities that never worked. My fine would never end up lost and after a reminder I would pay it.

In Spain we (well, I was the one speeding, but the car is registered on my husband, thus we) received a fine as well. It was not possible to pay via internet so my husband went to the bank, shortly after the fine came to our house. We were both utterly surprised when the 100 euro fine was quickly reduced to 50 euro, "since we paid it so quickly".

So to me, the Spanish fines are finer than other fines.
Posted by Annika Rosendahl